From Arrowheads / To Anvils

As the first day of school comes and goes, year after year the question arises, how long have we been going through this cycle? Although education has arguably always been a facet of our society, it has not always looked like how it does now in the 21st century. Airdrie is no exception to this idea; the first school in the Airdrie area was over a century ago in 1904. However, there were previous educational institutions like Christian education and homeschooling options, but they were far and few between.

With only one room and one teacher, students were expected to help one another learn. The schoolhouse itself was quite small, the sizes of the desks (pictured below) as well as photos of the schools are evidence of this. Located at Nose Creek Valley Museum is a section of the floorboard as well as the blackboard from the Beddington school in the Rockyview area. The schoolhouse was also a prominent gathering place (check out the NCVM Gathering Places exhibit on display until the new year 2023)  used for town events/meetings, holiday functions, or even baby/bridal showers. 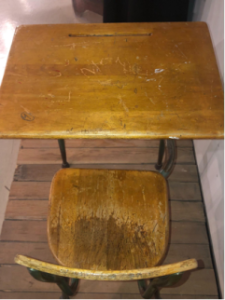 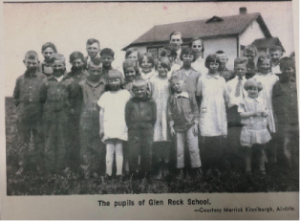 The teachers would get their education from a place called a ‘Normal School’ the first one in Calgary in 1905, and others in Edmonton after that. Once educated, teachers would work in these small schoolhouses, usually living on a teacherage (a small place near the school) or with a nearby family. The dress code for the teachers was strictly a skirt or dress for the female teachers (until the 1960s when pantsuits were allowed) and suits and slacks for the male teachers.

Students during the early 1900s did not have the luxury of a school bus or an easy car ride to school, nearly all children rode their family horses to school while others walked, or hitched a ride with their parents in a wagon. 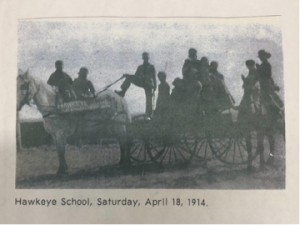 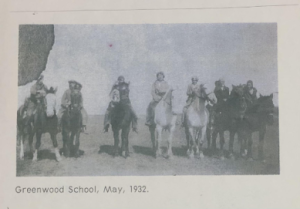 Boys and girls were treated differently during this era which was normal for the time. They played separately, were taught on separate sides of the schoolhouse, had separate roles and expectations, and were generally taught in different ways. The education for these kids may have been separate, but the punishments were nearly the same. Children would be spanked with the menacing and painful strap (pictured below), slapped on the hands with a ruler, chalk was thrown at them, sent to the corner, and the last measure would be to get sent home. Luckily these practices are incredibly out of date!

School supplies (all of which are pictured below) are another aspect of education that has changed drastically since the early 1900s. First, we have chalk and slate for individual work, simple enough to use albeit quite dusty. Next is the infamous feather and inkpot combo, by placing some ink in the small glass dipping pot, then dipping your sharpened feather into the ink, you could easily practice your cursive! However, the ink does not stay in the feather for long so there is constant dipping of the ink. Next comes the fountain pen, one could fill up the pen with ink and be set for some time while writing. Pencils were invented in the early 1900s, which are now commonplace in schools across the world and became a great alternative to the tedious nature of pens and ink. The geometry kit was also used to understand maps, measure distance, and solve math problems, exactly what they are used for today. 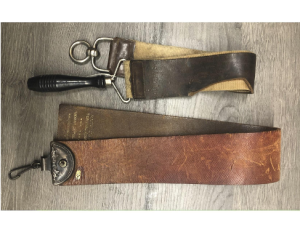 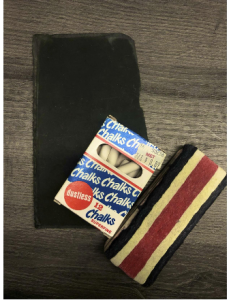 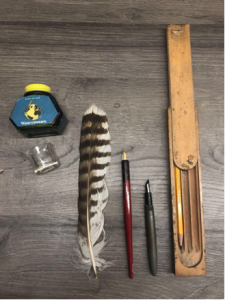 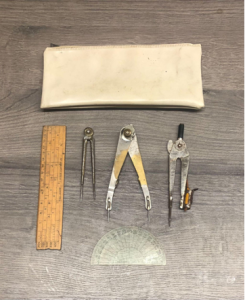 A normal school day started with the ringing of the schoolhouse bell at 9 am and ended at 4 pm with two 15-minute recess breaks and one 30-minute lunch. Their lunches varied depending on what their family had in supply. Usually, it would consist of a hard-boiled egg and a sandwich/pastry, but again it would depend on what the family had for food, either from their farm or from the town store. An example of lunch is pictured below; the students would carry their lunches in any sort of container that the family had. 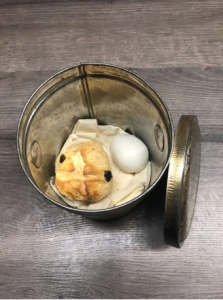 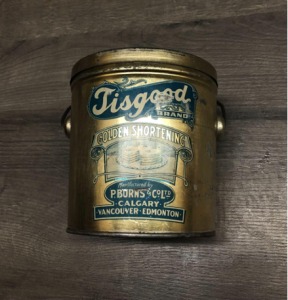 It is fair to say that students in the early 1900s had a drastically different experience with starting school than many students of the 21st century do. These comparisons put our modern life into a healthy perspective to consider and be thankful for.

The Struggle of Western Settler Women

For International Women’s Day this year, Nose Creek Valley Museum would like to pay homage to the women who played a part in the establishment and settlement of Airdrie. Airdrie was established as a village in 1909 with a population of 164. Some of the first women in/of Airdrie included Mrs. Esther Annie Bowers, and […]

Following in the theme of the “Obscure and Unseen” artefacts at the Nose Creek Valley Museum, I would like to bring to light some of the children’s toys that were at one time a beloved part of a child’s toy chest in the 1930s and 1940s. The “Dirty Thirties” was an era that saw families […]

In a hidden corner of the museum, under a few shelves of antiques and forgotten memorabilia from generations gone, sits a piece of technology altogether outdated. It is much larger than your average smartphone or computer, but it is arguably just as valuable for the insight it provides the user. The Knight Wideband Oscilloscope is […]